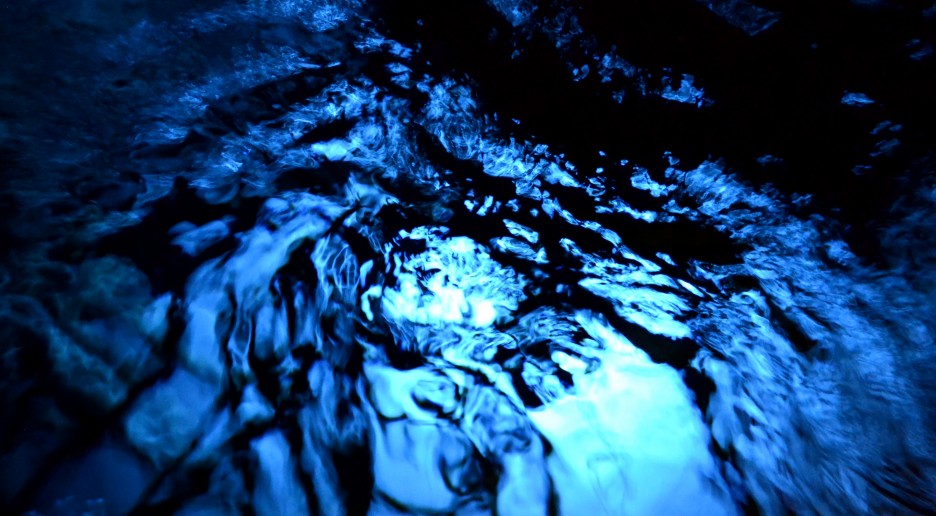 This is a photo of water reflections of Czerenkov radiation I took in Świerk-Otwock Nuclear Reactor.

First of all I need to admit I am no expert on atomic physics, just a humble biomedical engineering student, and I might mess stuff up. I guess I'll have to explain what the reactor looks like to explain how I took the photo.

In "Maria" Research Reactor, the reactor core is simply speaking a box filled with water, in which approximately 3ft long uranium bars are placed. The bars produce a huge amount of heat and radiation. For example, one bar has the power of some 1500 kettle heaters.

Water glowing a radiant blue. The reactor core is placed in a big 22 ft deep pool also filled with water, which is a cooler to the reactor core and acts as a screen against the radiation.

While taking the picture I was kneeling on a platform directly above the pool and essentially being "instructed" by three scientists not to mess up. I was so close to the water I could actually put my hand into it.

I guess that wouldn't be particularly good for my health, though I have to admit the thought of glowing in the dark was quite appealing.

So standing some 22 feet from the glowing reactor core; and knowing there is only a bit of water between you and The Reaction, was like gazing into the night sky and trying to imagine the vastness of the universe. This experience for me, was a tangible sign of the Creator's awesome might, and left me breathless. (I can't believe how geeky I'm being.)

It captured a "put out my hand and touch the Face of God" experience that makes me want to sing GLORY non-stop.