Paul is a friend from Westmont College. You may remember his face from a guest post I did with him a while back. We have a mutual love of Double Dare, Marc Summers and many other glorious staples of the 90’s.  He has a great spin on “the one” topic that I wanted to share with you today. I also hope you will check out his site www.allgroanup.com for some great articles and resources on the topics many “post grads” face today.  Paul has written his first book and I am patiently waiting for him to send me an autographed copy.

His autograph or Marc Summers. I’ll take either one.

Thanks for being part of the Love and Respect NOW community, Paul!” 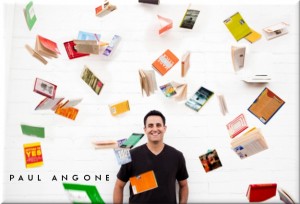 Down with “The One”

Why is the search for The One so hard?

Is it because God gets his kicks by sending us on impossible scavenger hunts? Like a junior high youth group leader who’d rather hang out with his girlfriend?

Or is it because The One is a magical fairytale creation? Like the unicorn. Beautiful, lifts you off the ground, and most importantly, is not real? (Sorry, Joy.)

Yes, you will marry just one person. Unless you go Old Testament or cult style.

However, is that one person the only person?

I married my wife over three years ago, we just had our first baby girl, and I can’t imagine having married anyone else.

But was she the only one I could’ve married? If I would’ve taken a different job after college and met my wife at a sales seminar instead of a college admissions conference, would I have somehow been out of God’s will? Doomed to a life married to “The Fifth” or “The Sixth” instead of The One?

I don’t think so.

I don’t think God operates like a cruise director, that if we miss the boat it leaves without us — our future husband or wife on the arm of someone else, sipping a margarita.

But whether there is such a thing as The One, or magical unicorns, is not really that important to me. What’s important is that we make a wise decision when deciding if this is right one for us.

The decision can be based on something substantial, like a Sequoia tree, roots deep into the ground.

Or the decision can be made like buying that Snickers bar at the cash register – you’re hungry and well, it’s there.  We can search for a mythical creature or we can look for someone who will do the nitty-gritty details of life at our side — because that’s marriage.
So instead of searching for this magical creature called The One, I propose we should be on the hunt for The Four – the four different relationships that need to be intertwined within the right one.

And the Four Will Become One

Marrying your best friend is becoming our go-to marriage cliché. Like going to a wedding and hearing, “love is patient, love is kind… “

But to me, marrying your best friend simply means that you can do absolutely nothing with this person and have a freaking blast. A trip to Target to buy pants can feel like going to Disneyland – well, at least on a day that Splash Mountain is closed.

If you don’t enjoy going to the grocery store with this person to buy eggs or changing the clothes at the laundry mat, then you might not enjoy doing marriage. Because marriage is built on a million more mundane moments than magical.

I have this distinct memory when dating my future wife of being stuck in LA traffic, looking over at her and thinking, “I wouldn’t want to be stuck in traffic with anyone else.” It was this tiny mundane moment that turned magical. That’s marriage.

However, don’t try to make this best friend an exact replica of your other best friends. I made this mistake for months, wondering why my future wife didn’t relate to me the same ways my college buddies did. Well, the friendship is different. Your wife might not tell jokes like your college roommate did. Your husband might not talk for hours into the night like your best friend from home. That’s all right. Like a wine versus a brewed coffee, they both might taste delicious, but each will have an entirely different flavor.

Attraction is super important. And attraction is not based only on looks. Personality, faith, humor, drive, passion, looks – they all factor into attraction. However, one way or another, if this person doesn’t get your motor running when they turn the key, well your car might be stuck on the side of the road at the first sign of a winter storm.

Your marriage is a business. Anyone that tells you different is trying to sell you something from theirs. Budgets, bills, savings, earnings, investments, plans for growth, money (or lack their of) can become acid on your threads of marriage. Just like you wouldn’t start a business with someone without talking through the realities of financial situations and goals, same for marriage. Because if he’s a spender and you’re a saver, and you won’t talk about it – then your marriage might be spent before it can be saved.

When married life begins to feel like a war – and it will, will you war against each other or will you war together? Life can be intense – lost jobs, lost loved ones, and lost hope. So when the bullets start flying, will you hunker down in the bunker together? Or will you be the first to turn and pull the trigger? When everything begins to war against your marriage, will the two of you fight for each other or will you fight against?

Paul Angone is the host of AllGroanUp.com – a collaborative community for emerging adults in-between growing and grown. His upcoming debut book All Groan Up: Searching for Self, Faith, and a Freaking Job! has been described as “Donald Miller meets Office Space.” Find Paul Twitterized @PaulAngone.

How do you feel about this notion that finding “the one” may be more about a choice versus a lightening bolt? Why?