I’ve been dating a guy that I met on a dating site for 4 months now. I recently noticed he is still active on the site and is still signing in to check it daily.

We’ve already met each other’s parents, share our feelings and talk about the future, so what gives? Why is he still active on that site? Is it an ego thing? 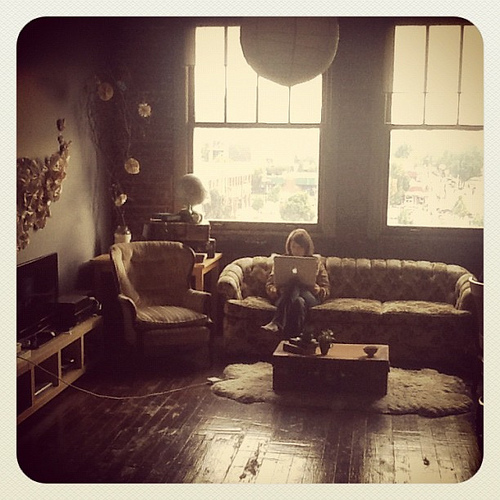 Have you asked him?

I’m wondering if the reason you haven’t asked him is because the way you found out that he was still signing into the site was less than honest?  Do we have a little Rupert Murdoch on our hands??

I do think there is reason for concern and that’s why I think you should ask him first and then go from there. But until then, I’ve asked a number of my guy friends to respond, as men, to your situation.

Because she hasn’t told him that he can’t.

He isn’t fully committed to the relationship – I would hope after four months he would have more clarity, but he’s definitely open to meeting other women.

He’s doing research for his own L&RNow-style blog.

He’s looking for someone he knows on the site that he is keeping tabs on (i.e. the one that got away).

She says they “share feelings and talk about the future.” Sharing feelings from her perspective is most likely deeper than his. One of two things is going on here: 1. He is ridiculously naive and does not realize how much his sharing his heart and future means to her and how serious she really is about the relationship, or 2. he likes her, but not enough to be ready to dive “all-in.” So he whispers “sweet-nothings” in her ear (and meets her parents) to keep her nearby. (Not consciously intentional by the way. He may actual think this could work out but doesn’t realize how “deep” her feelings are for him and how that may lead her on).

Wow! Really? If he’s committed, he shouldn’t still be on there.

The guy is not wanting to commit and he’s playing the field to see if something better comes along.

Men think that woman don’t know. But, they know.

He’s waiting for Joy to appear on the page.

He wants to validate that he got a good catch by comparing her with other girls.

He’s afraid of commitment and likes to boost his ego. (Though I am left with a question about how she came to find out he was still active on the site.) They both should have deleted their profiles by now.

She sounds like a stalker. He should break up with her.

He could be broken and giving into his desire to be wanted. He could be afraid of the finality of marriage, or tentative about making the wrong choice. He could be unsure of the relationship and is keeping his options open until he really feels solid that she’s the right choice. It could be dastardly, or innocent decision making.

The devil made him do it.

I don’t think it’s an ego thing. I think it would be more accurate to assume that he is trying to keep his options open.

Why is he still looking? Because they’ve only been dating for four months.

Lack of trust. He’s on there every day, but apparently so is she. Perhaps they’re both checking in on each other.

It’s not a good sign–probably reveals that he doesn’t have complete confidence in the future. The best thing she can do is communicate with him about this. Could be more here that we don’t know. But at face value, it’s unfortunate and I would be very cautious with this guy.

On some of those sights you prepay for 3-6 months. He may have passed his login to someone else so as to not waste money. My friend met his wife from using his other friend’s account.

Is she still checking the site? How does she know this?

Depending on how long he has been habitually logging on, he may simply be addicted to the action of constantly checking. Similar to people who feel compelled to always check Facebook.

How is Joy supposed to know this? Ask him.

What if he is checking the website to see if you are still active? You won’t know until you talk.

She asks, “What gives?'” Maybe it’s the same reason she checks the site to see if he is still active. You two don’t fully trust each other yet–plus, he isn’t ready to commit. You are great, and he met you through that site, so maybe there is someone even better out there. Until the relationship matures, he still might let his eyes wander, even though he thinks you are wonderful.

Either he is in, or he is out. It sounds to me like he is out. If he is “wandering” with her now, he will “wander” in marriage too. The pattern will continue if he thinks there could still be someone else.

There you have it – some great insight from the minds of my friends. Thank you men!

Take these thoughts with a grain of salt and prayerfully apply them to your situation. I would suggest then having a conversation where you respectfully (and humbly if you were hacking into his account or checking your own account daily) confront him with your questions. Get that honest communication going.

See what he says and then, since your parents have met him, I would run by your dad what this guy said as his answer. Your dad might have some more insight into the male brain for you as you move forward or, choose to cut the ties with this potential wanderer.

[ASTERISK KEY]
* = Some of my friends have potty mouths.
** = Dare accepted.
*** = Exact same sweet description as the first potty mouthed friend.
**** = This guy believes it’s the best answer ever.

What would your response be to this situation, as a participant or a friend?