So much of this country is in heart wrenching poverty from over population, caste system discrimination, health and economic ignorance. Pictures alone can make those of us who grew up with running water and more than three meals of rice a day- weep.  But what is blowing me away and why I want you all to listen closely is because over the last few days I’ve heard so many stories of entire communities that are pushing against social norms and deciding to do life differently. For themselves, but mostly for their children and children’s children.

This is how change happens- and I’m getting to see it first hand.

Today I visited another “Sweeper Community” and spoke with women who are mothers, wives, friends, and aunties, but also treasurers, secretaries and presidents of small clubs called “Learning and Savings Groups”. Once multiple L&S groups are formed, they join together to eventually create Community Based Organizations that are reocgnized by the government. For the lowest of the low to be recognized by the government and have a voice that is heard is a giant jump from years past when the only identifying marker for most was a thumb print.

This is Reshmi, her neighbors and friends- many of whom were sponsored children. I asked all of them about their marriages and parent’s marriages. Through the FH Savings and Learnings groups, they now understand the physical, social and emotional implications of child marriage. Many of these women were arranged in marriages at young ages and their mothers even younger. What I have gathered through conversation though, is that the child marriage culture was not out of an oppressive or malicious parenting style, but a system of thought that had permeated culture for years with no one questioning the negative health and societal impacts it was having on the women. They knew nothing else.  But I’m sure many of us still think, “arranged marriage? Really?”  What’s ironic is that many of them think its so odd that our parents aren’t involved in finding us a spouse! There are pro’s and con’s to the way both of our societies do things, and from what I can tell, this community is far more active than my culture in seeking out ways to improve and update their systems. Many of these women had a role in chosing their spouse and Reshmi giggled as she talked about having known her husband since childhood. She and her husband both want their daughters to get a full education before getting married. 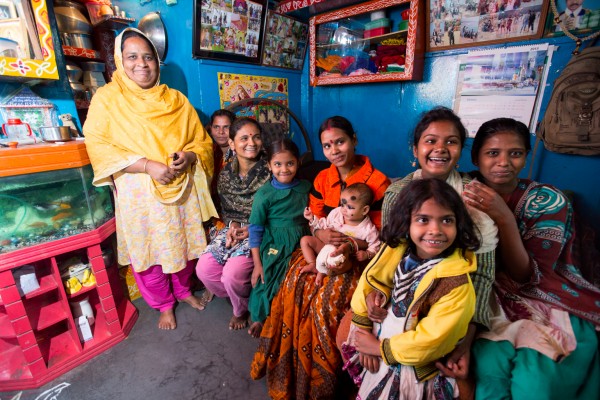 This is Reshmi’s six month old daughter Akila. Her face paint is a Hindu tradition of keeping evil spirits away. Her peeing on my leg is a tradition of babies from many years past. 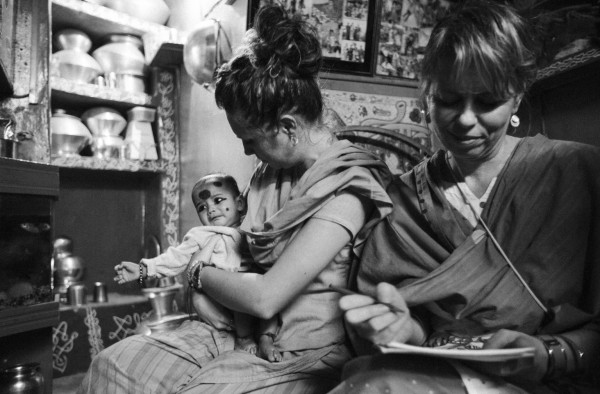 Reshmi said she is happy with her two daughters Akila and Monica and is fine not having a boy. This is foreign to this culture because many couples keep trying until they have a boy. Girls are married off with a dowry and generally live with the boys family, but the boys are supposed to stay and take care of the parents. It’s great that the family takes responsibility for their elders, but this thinking also creates the boys to be the parents “401k” investment (as my friend Heidi put it so well). The parents “invest in their retirement” by showing favoritism to the boys in food, education, etc.  For Reshmi and this community to change their view on the value of women is re-writing a cultural mindset. 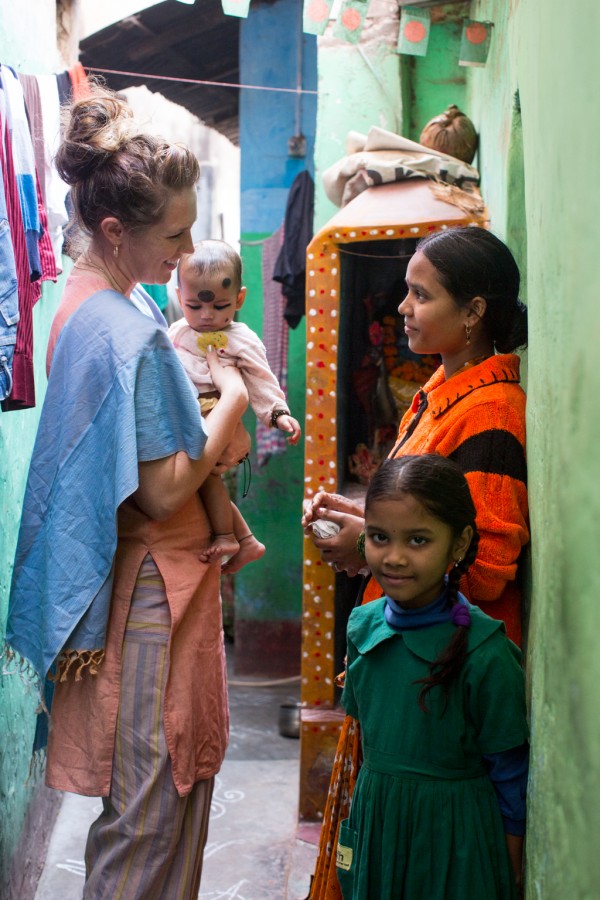 Savings and Learning Group. One of the aspects of these groups is to find an agreed upon amount that they can contribute weekly to a joint savings account. Then if someone has an idea for a loan, (generally something that would revenue income) they present it to the group for a vote and an agreed upon time frame to pay it back with interest. 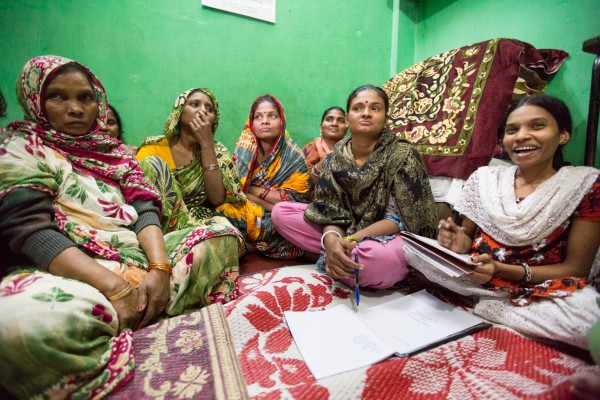 Josna is the president of the CBO. A very insightful and communicative women who was nominated and voted in by her peers. 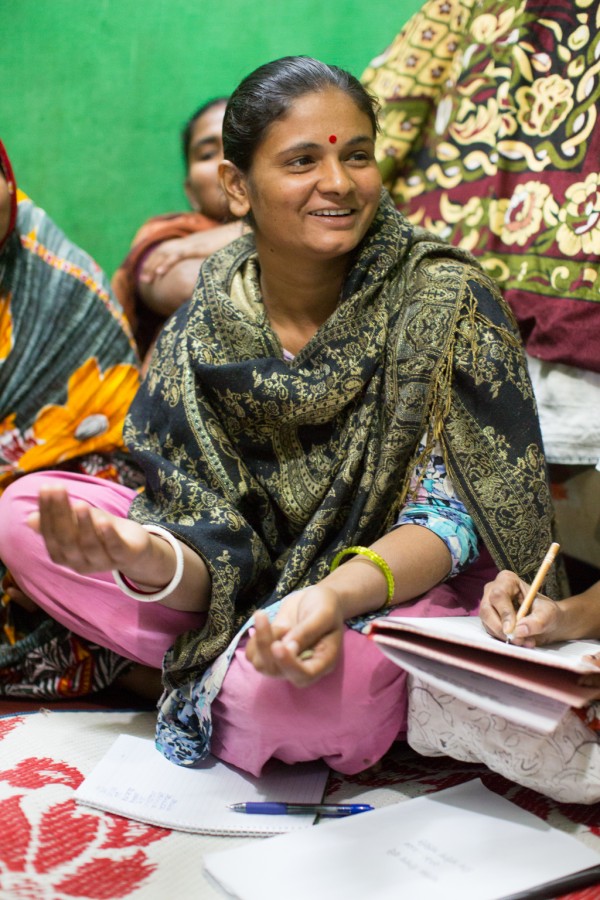 This woman was the comedian of the Health Savings group. At one point I asked the group to share who had most recently requested a loan. As we were waiting for the translator, I leaned over to my friend Esther and said, “Can you get a photo of that woman and her rings? That’s what I want someday for my engagement and wedding rings. Two fatty gold bands.” As Esther and I were whispering, we noticed this woman getting very animated about her rings and we couldn’t figure out if she had heard us, let alone understood English. The translator came back and said, “The most recent approved loan was for this woman to get this gold ring. She decided that after marrying off her three daughters and working very hard for many years, she deserved to get herself something nice!”

We all started laughing and realized how she sounded just like us. So while not ALL of the loans go for sewing machines or goats, this model is working and the women are having a good time. I’m not sure the the laughter, confidence, and gold rings would be as present in this community if it wasn’t for the empowering work and education Food for the Hungry has set in motion.

Oh and don’t worry, this sassy lady has ten months to pay back her loan…with interest. And she has a room full of smiling women who will make sure she does. 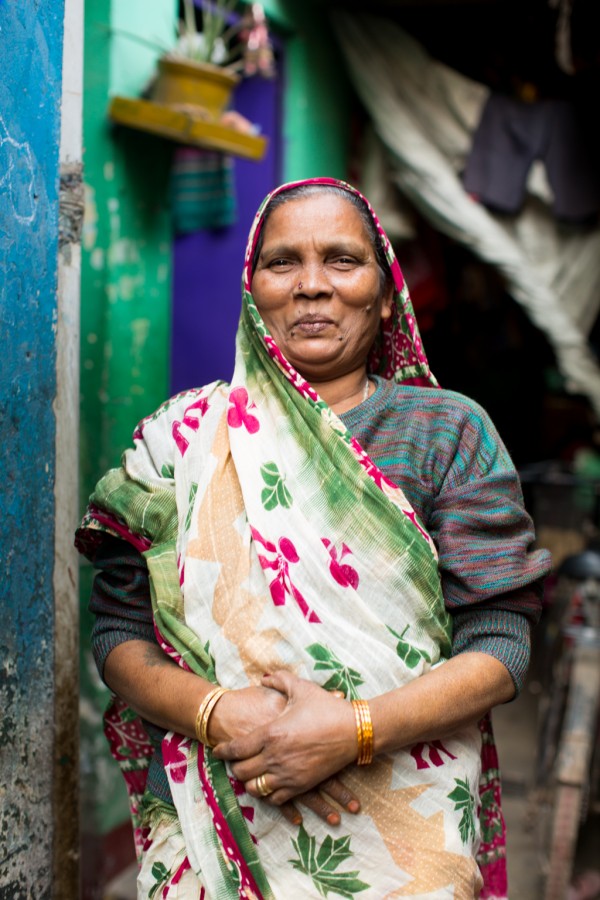 Once again the incredible photography is by the amazing Esther Havens.