I know Blair from the streets. We used to hoop it up on Saturday mornings in our SE Portland hood.

And by hoop it up I mean we would play H.O.R.S.E. or I would run around and try to set picks and do a lot of screaming.

Lately, we’ve been having hoop dreams. We plan to put the high tops back on their respective feet and intimidate the 9 year-olds who have taken over our courts; but until then, get to know my friend, Blair…

(He’s the one balling in Toms on the far left) 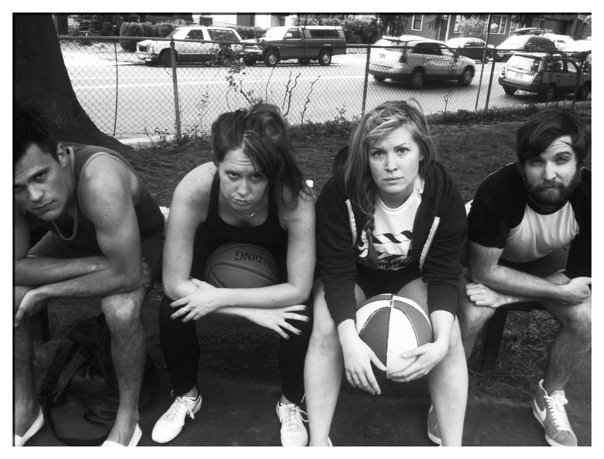 When I was in fifth grade, I had a VHS copy of a movie called “Rising Stars of the NBA.” It featured ten-minute profiles of young stars such as Grant Hill, Kevin Garnett, and Kobe Bryant. Like many boys that age, I wanted–and fully expected–to play in the NBA. I would watch those videos over and over, imagining it was me on the screen. For all the times I watched that video, I have only vague memories of the actual film, but I clearly remember what the description on the back said:

“Every boy’s dream is to play in the NBA but for most it will always remain just a dream. Rising Stars of the NBA highlights the best of a new generation of Basketball players, the best of the few who did the impossible and achieved their dream.”

Still those words spanked me with the reality of my own limitations. It’s not fun or glamorous; it’s a ringing in your ears that makes you want to bang your head against the wall.

And we spend a good portion of our lives trying to scratch that infinite itch.

I had a lightbulb moment on a drive home from work about three weeks after a break up. I remember thinking that I didn’t actually miss the girl I had been dating, just the relationship and the self-esteem that seemed to have vanished with it. As I healed over time and prepared for the possibility of a new relationship, I continued to think about that time in the car and what it suggested about my motivations.

I began to suspect that unless I was able to find a way to fall for a person, instead of a relationship, I would never be able to receive or give any kind of meaningful love.

These threads all came together while I was on a walk in my neighborhood. Something was missing inside me, some inadequacy, some sort of limitation that gnawed at me. Life wasn’t what I expected as a child; dreams don’t always come true and when they do, they can be miserable.

All the romantic poets that I read in high school had ingrained in me that life was bliss when you’ve met your true love–jet lag is a thing of the past and mosquito bites induce a contemplative euphoria. But as I walked down the sidewalk, dodging spiders that were hanging from the trees, I remembered a quote by Einstein, “No problem can be solved by the same level of consciousness that created it.” I realized that these kinds of feelings and experiences are human and I was expecting another person to solve my problem and make me perfect.

No human can do that.

Ironically, I started dating my fiancée a couple months later. Would our relationship have lasted if I hadn’t come to this epiphany? Who knows. But I will say from the beginning something was different:

For the first time, I didn’t want a relationship, I wanted a person.

Have you ever fallen for the illusion of a relationship instead of the reality of a person?

Blair lives in Portland, Oregon and is an agent with DC Jacobson and Associates, an author management company.