My friend, Esther, introduced me to Tim a couple years ago. Not hearing my name correctly, Tim tried to clear it up by guessing what he thought he heard Esther say.

Friends, if you don’t hear someone’s name correctly, just go ahead and ask them to repeat the name. Don’t guess by picking the word for a Swiss home.

On that irrelevant note, Tim “Tree fort” Willard (can you believe his parents named him that?) has some wisdom for you… 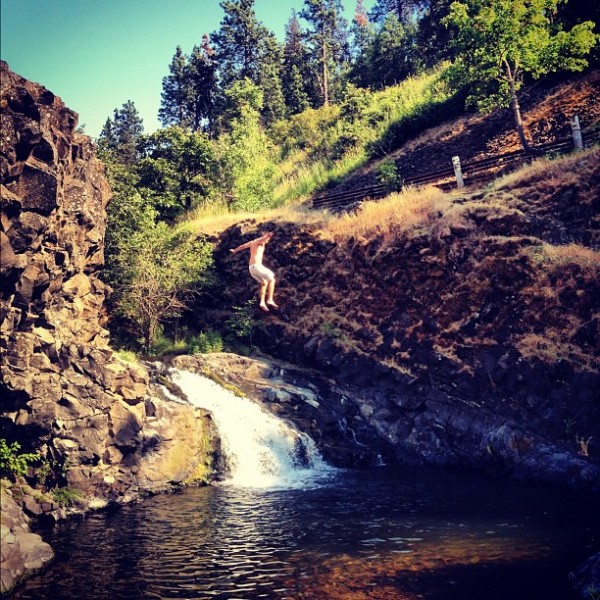 I spent my twenties getting expelled from universities, touring the country in a 1974 Leprechaun (and then a green van) discovering what love was and wasn’t and sitting in the quiet of a waterfall holding a flaming torch, stripping naked and jumping off the waterfall into the pitch of night.

I’ve spent my thirties trying to understand marriage and how to be a man in a whole new way. Still a “BARBARIC YAWP” kind of way, but just a bit more nuanced. I’m not sure what my forties will hold, other than more adventure.

Some people have asked if I regret tying the knot later in life (a couple months shy of 29), but I don’t believe in regret. I believe in hope, for what is hope but “love stretching out to grasp the thing desired?”

My wife and I found each other after one of my last concerts, held at a college campus café. We finished our Pearl Jam covers and she approached me and said, “I think you know my Dad.” Indeed, I had met him at a church we led worship in months earlier.

We, then, discussed the origin of sin until 3 a.m. A year and a day later, I married her.

I consider myself a romantic—some would even argue melodramatically so. When I proposed to Christine, I built a real faerie garden in the deep woods where I mountain bike, asked two young girls to step out of the stream bearing gifts and then danced with her to a music box on a boulder before I asked her to marry me—several small fires and candles lit up the wood.

This type of romance helps build and sustain marriages, in my opinion. But culture can project another kind of romance, one that is all about the self, one that views love as the next hook-up.

People who try to tell young men that marriage is all sex and eating, sex and football, sex and great vacations, sex and X-Box are selling them something.

Marriage is my toughest adventure yet. But it’s also the most beautiful.

It is the great hope of a boy who hungered for intimacy in consummation, but discovered it in the throes of his own tearful inquiry: “Will you forgive me?”

It is the unfolding of trust. For trust cannot be established in one day or one date, but over time and into time. It builds every day, and diminishes with every small betrayal. And yet, it rises again when it finally pulls the you from your old self, the you God made and wants to see shine.

Trust comes only when we sacrifice.

It is the step-two-three-four of the Whimsy Dance—the laughter at night beneath the covers and handholding on the Channel Islands, the dancing kiss above Faerie-land Loop at Bryce Canyon, Utah. All times of common joy in daily passing greeting a soul thirsty for its mirror resonance—the woman.

It is the splitempty moment, midst her screams, of the crowning head and the rhythmic wail of a newborn. And how in that moment God pries you open; you step out a new man, able to love from places you didn’t know existed.

It is in the fight that stings, where beauty galvanizes and pushes new growth.

It is in the early frost deck mornings with pixie-#2 watching the grey turn orange while mommy catches up on sleep.

It is holding a screaming child, wild and upset, that you find yourself in God’s arms and understand how He loves—how I flail and beat his chest, how he just holds me and calls me his own.

If I knew then what I know now, I would still have at it in my twenties. Perhaps though, I would spend less time praying for my own direction or calling or whatever, and more time praying that God would prepare me for the great and beautiful adventure of marriage.

But then again, naked midnight jumps off of waterfalls help with that too.

What are some moments of common joy you’ve had recently that remind you of your current beautiful adventure?

Nothing captures Tim like the quiet words of my wife, Chris, and the epiphanies of his three pixie daughters, Lyric, Brielle and Zion. Tim feels like a farmer most days, plying the writing trade in the fields of imagination.

He co-authored Veneer: Living Deeply In A Surface Society (Zondervan) with Jason Locy. Their follow up Home Behind The Sun: Connecting With God through the Brilliance of the Everyday will publish with Thomas Nelson Spring of 2014. He’s writing a devotional titled My Everyday: Discovering God in the Rhythms of Life with Bethany House Publishers. It will be released late fall of 2014. Tim’s also nearing completion of my first novel, a young adult epic fantasy. He’s astounded that Joy loves unicorns but hates fantasy novels. #fail

By the time you read this post, Tim will be living in Oxford England, studying for his PhD at King’s College London on the topic of imagination and beauty in the works of C.S. Lewis.