I’m excited for you to consume the following words and pictures from my sweet friend, Sarah. There are few settings in life where I am forced to contemplate life more than when traveling solo. I love the insights Sarah stumbled upon when she stepped foot into Spain.

Anybody up for a trip? 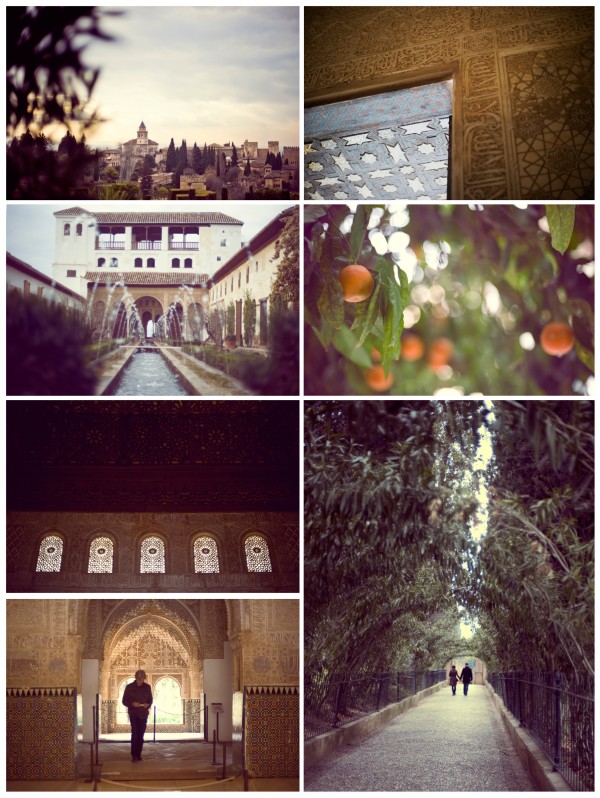 A Fortress for Love

A few winters ago, I cut ties with my 8-5 obligations to wander Europe with no defined goals other than to fill my eyes with the things I read about in art history books, to meet any human that was not American, and to photograph every experience.

Observable love and affection seemed to be everywhere I went in this region.

Couples unashamedly displayed their affections around every corner, at every café table, in every cobbled alleyway, even in tight quarters on the metro. It began as a shocking endearment to see so much love outwardly expressed, and sometimes it was shocking sans endearment.

After a month of travel it became banal, and at times deepened the lonely parts of traveling stag.

On a warm day in Granada I hiked to the Alhambra Palace and I got lost in the love of beauty. The Palace is a world of a creative labor. Detail is inlaid on every inch of every wall, and I was feeling like Alice in Wonderland as I wandered through immaculate gardens with roses, orange trees, and perfectly kempt hedges.

But there was a couple I had happened to cross paths with throughout the Palace, and they eventually pulled my attention away from the man-made beauty. They publically displayed that Spanish affection for each other that I had noticed upon arriving to the country; that affection I thought I was now unimpressed by—but, there was something gentle, confident, selfless and genuine about their affection that left me feeling (without knowing the reality of their situation) that their love could mend the world of all its pains.

At that point when my attention had been fully diverted from the Palace, I decided to pull a book from my pack and rest in the gardens. A Severe Mercy was the book of choice, and after capturing the memory of this couple on film, I opened to the dog-eared page of Sheldon Vanauken’s timely words on love:

And yet in another sense, it was our love itself, made strong within, that was the Shining Barrier…

We raised the Shining Barrier against creeping separateness, which was, in the last analysis, self. We also raised it against a world of indecencies and decaying standards, the decline of courtesy, the whispering mockers of love. We would have our own standards. And, above all, we would be us-centered, not self-centered. Against creeping separateness we would oppose the great principle of sharing. We saw self as the ultimate danger to love…”

Have you ever been to a place where love was displayed so openly? How did it make you feel?

How can we create and maintain the “Shining Barrier” of love that Sheldon Vanauken describes?

Sarah is a graphic designer and photographer but doesn’t limit herself to such. Really she just likes to reveal to the world how beautiful things actually are and can be.