“Joy, it’s not men vs. women, but just people who process and hear things differently.”

I don’t want to argue, I just want to share some enlightening tidbits I learned from asking a few good men what they would love women to know… 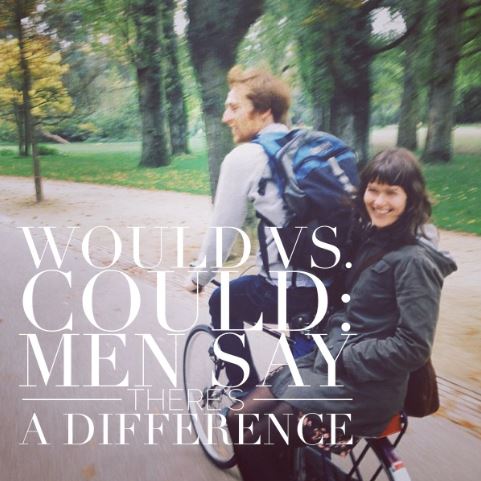 This doesn’t communicate to him that you’re weak, it simply communicates that you’re strong enough to set pride aside and ask. Many men desire to feel needed—and with the amazing accomplishments of women today, men don’t get as many chances to be affirmed in that area.

Stated authentically, asking a man to accomplish a task for you can often be a gift…to him. (This doesn’t mean he wants to become your French maid while you eat bon-bons. Annnnnd depending on the task, it doesn’t mean he will jump for joy either.) The point is that every man wants the woman he loves (or is interested in) to BELIEVE that he CAN help you.

It DOESN’T mean he thinks you CAN’T.

The guys I spoke with pointed out that “could” can subtly imply that I doubt if they can handle the task.

Even if they actually can’t handle the request, they still feel more encouraged if I say, “Would or will you please ______ for me?”

It’s up to the men to decide if they will be honest if they can or can’t complete the task, but the phrasing shows our belief, (which is honestly why so many men probably kill themselves doing things the woman they love BELIEVES they can. Belief is a powerful drug for men and can lead to notions of indestructibility.)

Note to the men: Being humble about your weaknesses is hot to women too…

Working for Love and Respect and studying men and women has made me acutely aware of just how sensitive men are to the women in their lives, especially in the area of competency. If she communicates that she doesn’t think he is able to do something—even in a joking manner—it can be like a swift kick in the pants to him.

I’ve started testing this out. (Not the kicking men in the pants part.)

For me—as a highly competent woman, who has to handle most things on her own anyway— it took setting my pride aside to even ask for help or allow help.

Sometimes it’s not even romantic! I’ve even practiced just letting cab drivers take my bags instead of going, “Oh no, no, no, it’s fine I need the exercise.”

Maybe that’s a bad analogy, or maybe I’ll end up marrying the yellow cab driver the next time I hit up the big apple. Until then, I think all of us can try to figure out what gifts we might be able to give to the person we like, love or are married to. Not because we can’t live without them, but because we want to let them live fully into the way God designed them.

Would you? For me?

Believing “Yes, We Can,”