I Heart Polygamy…and other consequences of the Industrial Revolution.

Men were challenged in church on Sunday to step it up and date. The fact is, there just ARE more women in church than men.

Anyone up for Polygamy?

(Lindsay, your daughter is on the far left)

Women could be heard saying, “that was such a great sermon. I am glad the men heard that.” It was excellent, but left me with the question of what or who needs to change?

So then I started imagining myself as a man.

A daydream I try to keep to a minimum.

As much as I would love to say that women and men have the exact same needs from church, it wouldn’t appear that way from looking at the bulletin. We are different.* That’s why there are Women’s Retreats, Ladies Night Out and Women’s Forums.

In his book Why Men Hate going to Church, David Murrow quotes business guru W. Edwards Deming who says, “Your system is perfectly designed to give you the results you’re getting.”

What and how did this system get started?

For the answer to what the system is at church, observe your own. Each one is different so I can’t make any blanket statements, but just look around, how many more women are there than men?  The reasons for how could stem from the Second Great Awakening in 1838 as well as the impact of the Industrial Revolution on the family unit. 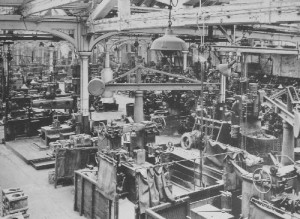 Total Truth, a book by Nancy Pearcey, explains the history on these events and how it effected men and women differently. The Awakening of 1838 was incredible because it encouraged women to read the Bible for themselves instead of solely trusting a man’s interpretation of scripture.

This was magnified during the Industrial Revolution. Before it began, most had a family trade that they were a part of. The unit consisted of both father and mother working together, all the while equally teaching and caring for their children. Because of the Industrial Revolution, work was removed from the home and the father was absent, causing the roles of men and women to alter drastically.

Sermons and manuals on child-rearing, (which would be the equivalent of Parents.com today) was a huge social presence. As a result of the Industrial revolution, this was the first time these items were only addressed to the mothers.

The fathers were simply removed.

The negative effects this had for women, was that they were taken from being equal producers with their husbands, to household consumers who were dependant on their husbands’ paychecks. Not to mention being socially isolated with young children all day.

The new work ethic outside the home threw men into a “competitive world of commerce and politics.” The masculine character itself was redefined. The home was now seen as the place of virtue (women were in the home) and the world was seen as corrupt (men were in the world).

Originally when the family unit was at home, the fathers had the responsibility of “moral and spiritual leaders” but now were being told they were “naturally crude and brutish.” Churches shifted towards the more “virtuous” parishioners and the men were no longer viewed as fit for the role of spiritual leader, nor did they view themselves this way.

That seems to me, to be the system that was set up in the dawn of the Industrial Revolution.

And it has produced results.

In light of the systems we have set up in the church today, how do women view men and how do men view themselves?

What can we do to help the system?

*If you have issue with this, research some studies done on the male and female brain. After you do that, if there is still confusion on if we are different, take your pants off.