A truly honorable man, coach, husband and leader who I deeply respect.  His recent death resurfaced the unending praises so many people have for him.

I still carry around in my wallet a card titled “Timeless Wisdom,” which among other things, lists Wooden’s 7-Point Creed.

3)  Make each day your masterpiece.

6) Build shelter against a rainy day (faith in God).

7) Pray for guidance and counsel and give thanks for your blessings each day.

If you don’t know who John Wooden is, you should. Besides having the most adorable ear lobes, (John Wooden’s earlobes = or > a baby kitten)  his near 100 years of life are something to be remembered. Read the touching article below to know some of his story.  I am moved by his undying love for his wife which lasted years after her death. 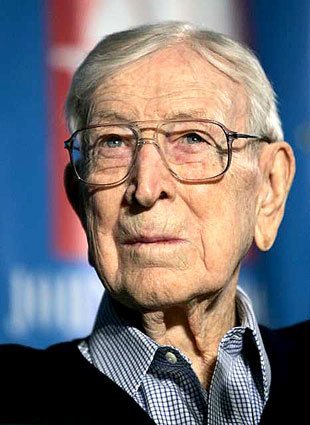 The sports world is mourning the death of a true legend. John Wooden was an amazing man who touched our culture in remarkable ways. Although he reached many milestones in his life, he failed to achieve one that was on the near horizon. He fell short of reaching his 100th birthday.

The one who became known as “the wizard of Westwood” was born in Martinsville, Indiana in 1910. That was only nineteen years after the game of basketball was invented. Early on he discovered how much he loved the game. As an eight year old he stuffed rags in his mother’s hose and took shots with it aiming at a tomato basket his father had nailed to a wall in their barn.

As a teenager he led his high school basketball team to a state championship. Then it was off to college where John distinguished himself at Purdue University. Thanks to his accurate shot and disciplined play, the Boilermakers won the national championship and John was named College Player of the Year.

Wooden’s love affair with basketball became a full-blown romance as a coach. From 1948 to 1975 he courted success as the head coach of the UCLA Bruins. His impressive (and unmatched) success underscores why roundball is a source of ongoing infatuation. During those years the Bruins set all-time records with four perfect 30-0 seasons, 88 consecutive victories, 38 straight NCAA tournament victories, 20 PAC 10 championships, and 10 national championships, including seven in a row.

A couple years ago I had the privilege of interviewing Coach Wooden. For an hour we talked about basketball, marriage and Jesus Christ. In those moments that seemed to go by too quickly, I discovered how much John loved his wife. John married his high school sweetheart in 1932 after graduating from Purdue. It was a marriage marked by storybook commitment and romance that lasted fifty-three years.

“In my marriage to Nellie,” John recalled, “I learned how important it is to find peace in yourself so that you can overlook the flaws in others. My marriage also taught me how to work through misunderstandings. The devotion I had for my wife had a tremendous impact on me. It allowed me to overcome all kinds of obstacles.”

Even though Nellie Wooden died on March 21, 1985 after a lengthy battle with cancer, the dedication that marked the coach’s devotion to basketball was evidenced in the way he continued to honor his wife’s memory.

“Every year since Nellie died I have written a letter to her on the 21st day of each month,” the coach told me. “In each letter I express my love and confess how much I miss her. I also chronicle the activities in the lives of our children, grandchildren and great-grandchildren.”

That stack of 252 letters was tied in a ribbon and sat atop her side of the bed that has remained undisturbed since the day of her death. During their marriage John slept on the left side of the bed. He continued to after she died.

In spite of such amazing devotion, there was something that outdistanced John Wooden’s affection for his wife. Without apology John voiced his love for his Savior to me. He compared his walk with the Lord to his marathon marriage.

“Both require hard work,” he admitted, “but the benefits are worth it. There’s no way I can fully describe how my faith in Christ has influenced the way I coached,” John said without hesitation. “It gave me an inner serenity in the face of stressful situations. It also motivated me to treat my players and colleagues with a degree of understanding that was beyond my natural ability. By learning to accept people and circumstances I didn’t fully agree with, I was able to act in ways I would not later regret.”

“Coach” (as his former teammates called him) continued to speak to a limited number of corporate groups and business conventions each year, attributes his ability to remain physically fit by watching what he eats and maintaining an exercise program. All the same the coach also prioritized a spiritual workout daily. In addition to spending time with the Lord in prayer, he read the Scriptures every day and reflected on sacred poetry he has memorized in his nine decades of life.

Although he hadn’t coached collegiate ball for thirty years, John Wooden never forgot how to differentiate between winning on the court and winning in life.

“There is only one kind of a life that truly wins, and that is the one who places faith in the hands of the Savior,” John told me. “Until that is done, we are on an aimless course that runs in circles and goes nowhere. Material possessions, winning scores, and great reputations are meaningless in the eyes of the Lord, because He knows what we really are and that is all that matters.”

This unparalleled giant of the sporting world discovered the truth Jesus taught, “But seek first his kingdom and his righteousness, and all these things will be given to you as well.” (Matthew 6:33 NIV)