I made the mistake of asking my friend, Val to do a guest post for me.

Because she is an incredible writer and chose to re-open my wounds to the world. Thanks, Val.

OK, I am being slightly dramatic, but it was weird how quickly her writing took me back to that place of pain I was in when we met.  I was however, comforted to see how in the midst of my brokenness, when I felt I had nothing to give, the Lord unexpectedly chose to use me in Val’s life during that stay at L’Abri.

It’s funny how you can forget details of your life that were so painful.

While scars are still within reach, much of this season has been redeemed for me, so it was strange but good to be taken back through Val’s writing. I am thankful to her for sharing this story.

And I am forever indebted to the unexpected friends I made at L’Abri who walked with me through my heartache. 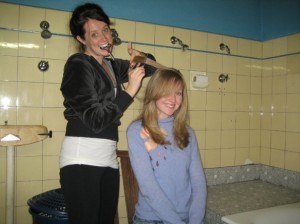 (Somehow I convinced Val to let me cut her hair. I guess she figured if I did a good job blowdrying her hair, why not trust me with dull-second-grade-science-project-scissors on her long locks? Obviously it’ turned out OK because Rhett still married her.)

Joy walked into the foyer with a backpack twice her size and an attitude unusual for a newly-arrived L’Abri student. There was no evidence of travel-weariness or jet-lagged exhaustion, and when I offered to let her rest for a few minutes before taking her on a tour of our campus, she declined.

Her sanguine approach caught me off-guard.

Most students arrive at L’Abri tired and a little defensive, worn-out from the 10 hour journey and the trek up the mountain and perhaps a little suspicious of my preppy, good-Christian-girl appearance. Joy’s friendliness was refreshing and disarming, and within minutes she was sharing why she came to L’Abri (I had asked): her marriage bound relationship had been called off, and she needed some space to process that for a while.

Fair enough, but I learned later that the cheerful, matter-of-fact manner in which she explained why she was half-way around the world belied the reality of the wounds she was slowly healing from.

There was more than hurt, though, and as we came to know each other the reality of Joy’s resilience was evident. Even after she broke her ankle in an ill-fated attempt to ride down a steep incline in an attempt to “snowboard” on a sled, Joy resigned herself to a cheerful fate of not hiking in the glorious alps and not hauling herself up and down the mountain to visit L’Abri’s library, Farel House. In fact, she spent much of her time not going outside, and instead haunted Bellevue, L’Abri’s main dormer and dining hall, night and day.

Our little ghost eventually became like a forth roommate to us female junior staff members at L’Abri. Erin, Renea and I would find Joy sitting at our desk or lying in our beds, chopping veggies in our kitchen or drying our hair. Her presence was a comfortable and natural addition to our little community, but I learned that there was more providence in God bringing her into my life that I initially thought.

Because while Joy was haunting Bellevue with crutches and a messy bun, I was busy falling in love with the guy in the next room, Rhett.

At dinner one night, when Joy asked the men at the table whether they would rather be loved or respected, a metro-sexual, New Age South African, two former Eagle Scouts, a Reformed Michigander, and my Southern, mysterious hero, Rhett all answered the same way:

they would rather be respected.

She went to explain that her dad’s research indicated that the majority of men would respond in the same way. For me, the wheels started to turn. I had a vague memory of seeing Emerson Eggerich’s book on my roommate’s beside table senior year, when her pre-marital counselor had advised her and her fiance to read it. Joy happened to have copies of the book with her in Bellevue (how convenient!), and I dove in.

I think it’s fair to say that Love and Respect, Joy’s presence at L’Abri, and Rhett & I meeting all at the same time was providence at work. The principles in love and respect aren’t natural, and some of the ideas in the book were hard to get used to, but the provision of these concepts at the very beginning of my relationship with Rhett set a foundation that we still build on today.

Unconditional respect? Speaking carefully and thoughtfully to your spouse? Showing concern for his/her reputation and dignity in front of others? How novel!

As Rhett & I were working through various issues at L’Abri, the Love and Respect principles set a communication climate for our relationship that permitted us to speak openly and honestly without getting snarky or selfish. Together, we practiced laying down our preferences for one another. We worked on saying “I’m sorry”. We tried to understand each other’s words in light of the realities in which each gender communicates.

As a result, speaking in terms of love and respect has become habitual in our married life, and though our marriage isn’t without hiccups, Eggerichs’s observations in the book have genuinely set a “tone” for us that makes us both feel safe and dignified as we continue to build a life together. Conflict and tension will continually arise in our household, but these principles of love and respect give us equipment with which to address these issues. And the more we practice them, the easier they become.

So I’m grateful for the little handicapped imp in Bellevue who allowed me to share my budding romance with her.

And I’m grateful that God used her in the midst of her brokenness as a minister of the Gospel. Because I’m not sure where Rhett and I would be without having been introduced to Joy. The concepts of love and respect have been invaluable in our marriage, teaching us to honor God in the way we speak to one another, and providing us with a healthy context in which to have hard conversations.

There will always be hard conversations, but love and respect provide us with a vocabulary in which to navigate those conversations well.

And for that, I’m thankful.

All of the “junior staff members” at L’Abri have been guest posters on my blog. All of them are incredibly wise. Take note of their words.

What are some things that have surprised you during times of brokenness?

What do you think about the statement, “understand each other’s words in light of the realities in which each gender communicates”?

And why haven’t you read my dad’s book yet?!