I first heard Josh White speak more than five years ago when I attended a 6 AM Bible study he was leading. If Christianity worked on a gold-star system,

…6 AM Bible studies should deserve at least 72 stars.

Fast-forward a number of years, and Josh and his adorable family decide to plant a church called Door of Hope just six blocks from my house. Josh is not only a pastor, but he is also a recording artist, so the church is chock-full of people who look like they belong in a band. Well, actually, most of them are.

(Insert my regrets of not sticking with middle school orchestra. Or voice lessons. Or piano lessons.)

I asked Josh to be part of Illumination because I know his music and teaching have created lightbulb moments for many people in our generation. He released a new album this year that I have had in my car on repeat for the past five months.

The album is titled, “Wounded Healer.”

The lyrics embody the bigger point of the Illumination Project, which will make sense when you hear what my father and I share on the film series, coming out next year.

In the meantime, ruminate on the words Josh shares through his music and this poetic piece he wrote just for this Illumination series.

Drive the Shadow Back

Kick up the fire, and let the flames break loose
To drive the shadows back – Philip Larkin

I stand on the sidewalk at dusk, a long shadow of me rushes East stretched out like some bizarre apparition. 20 feet of legs, 4 feet of fingers, oblong head and stretched torso. As I walk, I find its presence unnerving – disproportionate and without substance, like some strange projection of my ego if it was solid.

This shadow, the shadow me, is the lie of me, the dark me. It is the me that can do nothing for anyone or anything, but merely bury everything it touches in darkness. It is the me that is blown out of proportion with visions of grandeur and self-proclaimed self-importance. I do not like this shadow as it stretches out from me.

I am disturbed, like Nosferatu, it is grotesque, this monster me. I turn around and confront the sun. Face to face I recognize, as long as he is before me I have the power to hide him from the world that is behind me. As I stare down the Sun, I peek over my shoulder and see that the shadow me is gaining ground.

What is better, the lie or the light?

I stare back at the Sun, he is losing as his yellow goes red, he sinks beyond the horizon. Darkness falls. Both Sun and shadow gone, the night has come. The shadow me is now all of me and with regret I pray that the Sun would rise.

In the dark the heart goes cold. I hear the ancient prophet cry, “Woe to us, for the day declines, for the shadows of evening lengthen.” This dark is as expansive as it is claustrophobic. I see nothing, not even the lie of me.

Suddenly hands clasp down on me, I gasp as I am flung. I feel the hard, dark, earth beneath my back. I, like a scrapper, exchange blows with a man of the night. There is no light here, just our furious tears and our grappling fears. These hours pass relentless. I think I might overcome but in one moment I am out of socket and undone. I find myself desperately clinging like a drowning man to my enemy.

As dawn breaks in, my opponent in Holy love, silhouetted by the rising Sun, releases me from the shadow me, and names me before he leaves. I never knew how heavy shadows could be. As the Sun rises above I am exposed but do not care, for everything seems different now. It is the lightness of light and the fury of flame. This world seems kissed with meaning and my heart burns with wonder. Illuminated by the divine defeat, broken but released, I am now open to this fellowship of the burning heart! 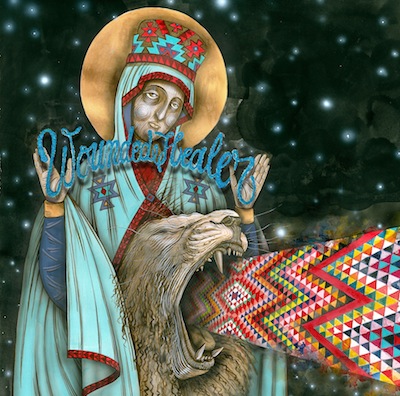 Foolishness strips the soul of it’s light
We foolishly slipped cause we were all blind
But in to the dark You brought in the light
But Light with out sight is perpetual night
Wounded Healer, please

p.s. The incredible female voice on this track is my friend Liz Vice who will be performing LIVE on Sept. 7th. If you get the whole album, she kills it on track #4.

Josh White started and serves as lead pastor of Door of Hope church in Portland, Oregon. He has previously been a teaching and worship pastor as well as lead singer of the band, Telecast.

Josh is married to Darcy and they have two children Henry and Hattie Star.