To say Sarah Thebarge has had somewhat of an eventful life in her few short decades is an understatement.

From breast cancer to broken engagements, and hiding in closets with refugees, she’s someone who has had to push the pause button quite a few times to say, “Uh, God? What’s going on here?” (My paraphrase.)

Anytime I meet someone who has been through that much, I’m fascinated to know their thoughts and beliefs.

Sarah has wisdom, is an exceptional writer, and happens to have an office right below me at our church. (Which has made for impromptu lunch dates to Whole Paycheck… I mean Whole Foods.)

Listen in as she shares a piece of wisdom from her journey so far. 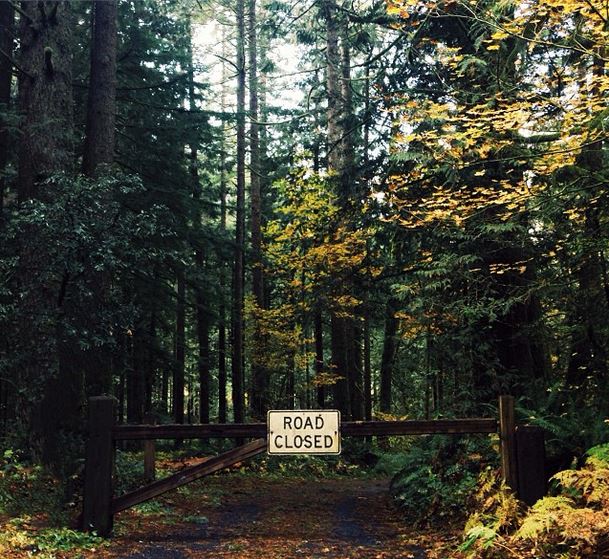 End of the Trail

My friend and I spent six months planning a trip to Utah to hike in Zion National Forest.  We mapped out trails, booked airline tickets and arranged accommodations.  And then, two days before we left, all of the national parks closed because of the government shutdown.

It was too late to back out of our flights and lodging, so we decided to fly there anyway and see what we could do in spite of the park’s closure.

We read that even though the parks were closed, the highways that ran through them were still open.  So we rented a car and drove up to the park’s entrance.  A man wearing a park ranger uniform stepped out of the booth with a stern look and asked us where we were going.  We told him we were driving to a town on the other side of the park.

“You can drive through, but you’re not allowed to stop the car, park, or go on any of the trails,” he growled.

My friend asked the ranger if he had a map of the park we could use while we were driving through so we could identify animals and landmarks.

“No sir,” the ranger said.  “We don’t provide maps because they may enhance your desire to recreate.”

We drove past the guard shack as fast as we could, then burst into hysterical laughter.  And, needless to say, the phrase became the quote of the day.

When I asked my friend to pass the salt or take my picture or pull the car over for a bathroom break, his answer was the same.

“Absolutely not,” he said. “It might enhance your desire to recreate.”

The next day we drove along a road that wound up the side of a mountain a few miles outside of Zion, until it dead-ended at a trailhead.  We started hiking on a path that led us through a meadow and then down into a canyon.  The cliffs were steep on either side, and a small river flowed through them.  For a few miles, we followed the path alongside the rushing water.  And then the land ran out, and the river became the trail.  We hiked in the frigid water, which at some points was waist-deep, until we came to a waterfall. There were ropes mounted on the canyon wall,  which we used to rappel ourselves up the back of the falls.

And as we stood there at the top, witnessing the water cascading down into the massive canyon, I realized that what I thought was the worst part of the trip — the park being closed — became the catalyst for an adventure we never would’ve had if the park had been open.

We would never have witnessed this waterfall, or been able to claim we’d once hiked for miles through a river, or been denied a map for fear it would enhance our desire to recreate.

As I flew home a few days later, I realized that sometimes closed doors are a gift.  Sometimes the unexpected interruption is just what I need (though I don’t realize it at the time).

Sometimes the trail has to end so the path that leads me to a bigger, better adventure can begin.

Sarah Thebarge is an author and speaker.  Her memoir The Invisible Girls was published in 2013.  She is single and has no pets (she doesn’t even have a plant.)  She currently lives in Santa Barbara, CA.