Robin Williams: The Art and Curse of The Observer

As a single woman in my thirties, my current M.O. is to go out with pretty much anyone at least once. A new-ish friend asked if I would go out with a guy she knew, and while he looked slightly older, I didn’t know he was a solid two decades my senior.

Taking a bite of my pizza, I heard him ask the age old question, “What’s your favorite movie?”

Surprised, he shot back the very question I was thinking, “How old are you?”

And then we quickly moved on to the next topic of conversation, ignoring the fact that we were both trying to figure out what he was doing while I was still in utero.

When I was little, our television broke and my parents didn’t bother getting us another one for seven years. (Thanks, guys.) Finally all three of us kids pitched in to buy a 19″ dual TV/VHS and it changed everything. It felt like Christmas morning every time I heard that flapping sound after pushing a tape into the VHS player with my chubby little hands.

Hook was a big deal because it was the first PG-movie I had ever seen. I was so tickled by the humor and imagination of it all that I watched it at least five times before it had to be returned to the video store.

At that age, though, I just enjoyed being entertained. I wasn’t thinking about Robin Williams as a human being who possibly had a life, children, Parkinson’s disease and a mind that observed life so intently that he would someday chose to end his own.

Like many of you, I let out an audible, “NO!” when I got the text from my mother informing me of Williams’ death by hanging. I felt instant nausea over a man I had never met, but who brought pure joy and laughter to me and so many others. 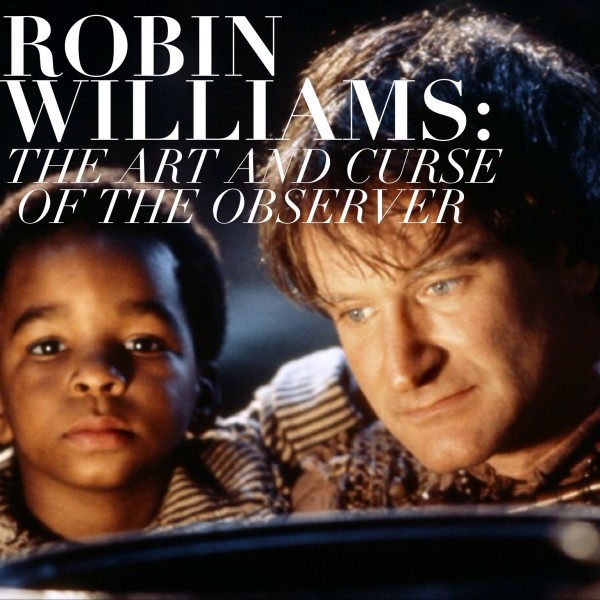 It’s been a year and a half now, and what has come out of those classes is an intrigue and deep respect for comedians, and an obsessive observation of the observers.

I call comedians “observers,” because I believe, like theologians, philosophers and true artists, they cannot create unless they are constantly thinking about the world around them. Yet this process of constantly trying to study humanity, understand pain and ask “why” in order to create humor can also contribute to feelings of hopelessness.

Philosophers and pastors try to understand the heavy questions of this world through logic and reasoning, but comedians highlight the hard questions by making light of life.  It’s a way that makes every person feel like they aren’t the only one asking the question, and it brings most of us to the point of laughter and lightness. For a moment we feel less alone in the world.

While we’re laughing, though, we forget to pause and appreciate that the trained mind of a true comedian is often flat-out genius. Over the last year my fascination for live comedy has led me to multiple improv shows at iO, Second City and UCB in New York and Chicago. My interest has been less about laughing (although it’s a beautiful by-product) and more about the craft. These comedians often have a broader survey of history, news and pop culture than most reporters do, and they have the ability to connect with each other and the audience in a way that pinpoints the heart of it all.

Pinpointing irony and observation like no other, writer David Foster Wallace, was a comedian in his own right. He could take something as random as the ethics of boiling lobsters to their death and make you laugh, while simultaneously feel like your head was going to explode because of his spiraling logic. I get consumed by his brilliantly tortured mind to the point where I find myself understanding why he, like Williams, took his own life.

It’s as if Wallace could see every side of a coin, and that coin had 24 sides. Like Williams, Wallace hung himself in what I can only imagine was one of the most horrific, final moments of desperation–a fatal longing to momentarily feel something so real, so there would no longer be the need to feel.

So what’s my point?

Sadly many of us don’t pause to observe life in an acute way. We aren’t forced to ask the questions about humanity that a comedian or artist must do on a daily basis in order to rightly represent what they are trying to communicate or highlight about the world.

But, then again, some of us do. And when we do, the reality is that we probably will become depressed. There is a lot of sadness in this world. Many of us won’t get to the exhausted state of Williams where we would choose to drastically end our lives, but we all have a way of numbing ourselves when we don’t want to see the pain around us or face our own demons.

Since I identify myself as a Christian, I know my perspective on this world should be different. Without depression? Without Parkinson’s? Without suicide? No, those things will haunt many of us no matter what we believe. But the hope is that those things won’t win out over life.

I want us to continue to observe, ask “why” and not be afraid to truly feel this life. Jesus deeply felt the joy and sorrow of humanity, and it’s what compelled him to take action. Christianity asks people to see what’s wrong with the world and ourselves, and believe there can be healing–not happiness necessarily, but healing.

I pray for a spirit of humility as many Christians attempt the unglamorous work of making all things new–fighting against our own demons, the darkness of this world, depression and loneliness, in order to bring good news, hope, healing and real joy (and hopefully some laughter) to humanity.

“But I’m a Christian and I’m depressed! How am I supposed to bring this “good news” to the world? I’m not even sure I believe it anymore!”

Let’s let depression or sadness become a moment for pause. Let’s not numb or distract ourselves from the opportunity to observe. Even if you are not a Christian, I would encourage you to pray for an opportunity to see humanity in a new light. Look up from your phone at the world around you. Turn off Netfix and ask God, “If you are real, and if your words in Scripture are real, what can I possibly do to bring light to the world?”

Following in the footsteps of Jesus, we can see that He prayed and asked the Father for strength even when He felt that He had none. He was given the strength to see the world through the unnatural lens of love, and I believe we can pray for that kind of love, too.

And following in the footsteps of observers and comedic geniuses like Robin Williams, we can then hopefully and intentionally bring a light and lightness to the world around us.

A world that is intended to be as it is in heaven.

p.s. When I got the text from my mom about Robin Williams’ death, I immediately went to his Twitter to read what felt like to me, his last breath into the public world.