I prefer real live-human-contact games over board games. Unless it’s Trivial Pursuit.

In college, my boyfriend and I bought Trivial Pursuit and after the break-up, had to discuss how we would handle visitation rights.

Outside of Trivial Pursuit, I don’t adore board games.  However, if the board game happened to be life size like when I was the Queen in a game of human chess, then I’m cool with that.

Prior to reigning as Queen, my only experience with chess was in college when I was taught by a five year old. He was really good. I would cheat to beat him, but then call him out if he cheated. He was young and needed the life lesson.

Another experience I had with a board game was playing Ticket To Ride with my mother and sister-in-law, Sarah. Let’s just say they are both really competitive and I vowed never to speak to my mom again.

It was as if being her flesh and blood AND only daughter meant nothing to her.

On Saturday my mother was in town and saw me in my “real game” element. Real games in my playbook are anything that involve running, screaming and the ability to push and/or bite. So, as you can guess, she was watching me play two on two basketball. I realized in those vigorous 17 minutes of fun, that my mother will always stand on the side of “truth telling” over familial loyalty. She is the worst ref ever.

Sunday was my friend Destiny’s birthday party. She likes games as much as I do and so naturally her party revolved around “Soccer Tennis,” pizza, Gatorade and Blizzards. She told me that she learned the game from our friend Brendan back in the day. He’s a musician now, but may have missed out on his natural game vocation. 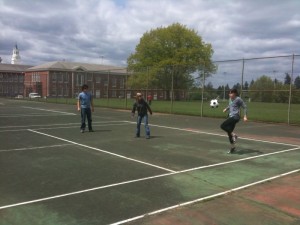 3-4 Players on each side of a tennis net.

Scoring is like volleyball, but you can’t use your hands. The ball can bounce a total of two times, interspersed with three hits. Hits can consist of using any body part EXCEPT hands.

Another game I learned last summer from my friends Justin, George and Chase is called “Lightning ball.” It goes a little something like this: 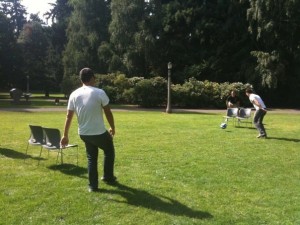 Two chairs on each side.

Take a free kick and hit the chair on the fly = 1 pt. But if the other team catches the ball in the air after you hit the chair, they steal your point.

Games to 3 or 5. You can score on offense or defense.

Last year for my birthday I gathered friends to play capture the flag.  I made the territory far too large and neither team ever found the flag, but boy was it fun.  I was being chased by my friend Mike and knew there was little chance of making it back to “no man’s land.” Then a thought occurred, “Mike is just getting over pnemonia…and what if this was really war, Joy? You are Jack Bauer.” Something came over me in that moment and I ran up the hill, barrel rolled over a fallen tree (not making this up) and hid in a ditch until the enemy/Mike had passed. It was glorious.

My birthday is coming in June (shameless plug) and my dream is to have someone organize “The Amazing Race – Portland Edition.” But that seems hard. Maybe I’ll just have everyone enlist in the army so we can have an authentic game of capture the flag.

What are your favorite games?