Recently my mother gave me a book of letters written by Francois de Salignac de La Mothe Fenelon who was Archbishop of Cambrai.  (I wonder how often he got, “What’s your middle name?”)  He lived during the time of Louis the Fourteenth and was the spiritual advisor to Louis and others in his court who sought a life of true spirituality in the midst of a court life which was shamelessly immoral.

The letters have been paraphrased in this version I have which is called “Let Go,” but the originals are called “Spiritual Letters.” I’ll admit I don’t want to hold the book up in public since the title “Let Go” probably leads people to think I have control issues.

I DON’T HAVE CONTROL ISSUES! NOW STOP LOOKING AT ME!

Anyways…I have been enjoying Fenelon’s words and wanted to share this short letter.

But understand that peace does not depend upon the fervor of your devotion.  The only thing you need to be concerned about is the direction of your will.

Give that up to God without reservation.

The important question is not how religious you are, or how devoted, but rather is your will in harmony with God’s?

Learn to be detached from the world and completely abandoned to God.

The least you can do is to desire and ask for such love.

God will then pour out upon you that special love which only His children know, and He will give you peace.

How do we love His glory more than our own life and will?

It’s a nice sounding sentence that we can nod our head to and say, “mmmhmmmm.” But how do you think one can live in a way that truly believes this statement?  Does Fenelon give any insight into the “how?”

This was correct, unlike Haley’s first Guess: Charte Cathedral…i think its a poor guess but it is a funny name because it sounds like a gross bodily function. 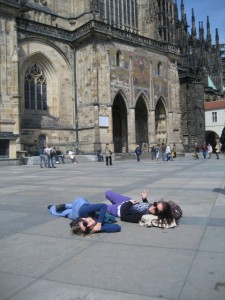