Since I just traveled to Oxford and spent time spying on C.S. Lewis’s home, college and almost every pub he dined in, I thought it only fitting that I highlight a couple parts from his chapter titled “Christian Marriage” in Mere Christianity.  I suggest you read the whole chapter but I have noted a few of my own thoughts and would love to hear yours! 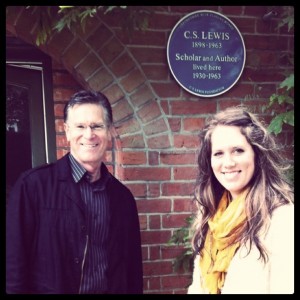 Part I: On Love

What we call ‘being in love’ is a glorious state, and, in several ways, good for us. It helps to make us generous and courageous. It opens our eyes not only to the beauty of the beloved but to all beauty, and it subordinates (especially at first) our merely animal sexuality; in that sense, love is the great conqueror of lust. No one in his senses would deny that being in love is far better than either common sensuality or cold self-centeredness.

But, as I said before, ‘the most dangerous thing you can do is to take any one impulse of our own nature and set it up as the thing you ought to follow at all costs’.

Being in love is a good thing, but it is not the best thing.

There are many things below it, but there are also things above it. You cannot make it the basis of a whole life. It is a noble feeling, but it is still a feeling. Now no feeling can be relied on to last in its full intensity, or even to last at all.

Knowledge can last, principles can last, habits can last but feelings come and go. And in fact, whatever people say, the state called ‘being in love’ usually does not last.

If the old fairy-tale ending ‘They lived happily ever after’ is taken to mean ‘They felt for the next fifty years exactly as they felt the day before they were married,’ then it says what probably never was nor ever would be true, and would be highly undesirable if it were. Who could bear to live in that excitement for even five years? What would become of your work, your appetite, your sleep, your friendships?

But, of course, ceasing to be ‘in love’ need not mean ceasing to love. Love in this second sense — love as distinct from ‘being in love’ — is not merely a feeling. It is a deep unity, maintained by the will and deliberately strengthened by habit; reinforced by (in Christian marriages) the grace which both partners ask, and receive, from God. They can have this love for each other even at those moments when they do not like each other; as you love yourself even when you do not like yourself. They can retain this love even when each would easily, if they allowed themselves, be ‘in love’ with someone else. ‘Being in love’ first moved them to promise fidelity: this quieter love enables them to keep the promise. It is on this love that the engine of marriage is run: being in love was the explosion that started it.

If you disagree with me, of course, you will say, ‘He knows nothing about it, he is not married.’ You may quite possibly be right. But before you say that, make quite sure that you are judging me by what you really know from your own experience and from watching the lives of your friends, and not by ideas you have derived from novels and films. This is not so easy to do as people think.

Our experience is coloured through and through by books and plays and the cinema, and it takes patience and skill to disentangle the things we have really learned from life for ourselves.

I often hear, “we fell out of love” or “I’m no longer happy in this” or “This isn’t the person I fell in love with.” This is sad, but what makes me even more sad is that people are saying this after a year of marriage or after a tough season of life.

One study I read a couple years ago revealed “that five years after reporting serious trouble in their marriage, seventy percent of the unhappiest couples testified that they were ‘very’ or ‘quite’ happy in their marriage.” (The Case for Marriage, Waite and Gallagher, 2001)

I point this out because it magnifies the fact that there is an ebb and flow to life. Seasons of good and bad. I wonder if we are willing to stick it out the tough seasons or become disillusioned when our lives don’t constantly match what we see in the “cinema.”

Married people: Do you agree with Lewis?

With entertainment’s large focus on the “falling in love” stage, where can you find helpful commentary on the second phase of love that Lewis talks about?

What do you think about the “falling in love” stage being instinctual, almost an obsession, while the second phase of love is more of a chosen practice, or habit and represents a far greater amount of the relationship?

There’s more to this series! Check out Part 2 HERE.