Recently I spoke at Belmont University and later that afternoon did an “Ask Joy” session with students.

This is probably my favorite aspect of my job.

I love hearing from you all through the site, but there’s something about seeing your face, hearing your questions, and then getting to respond to you with an answer that results in you lying on the floor in the fetal position. It’s the BEST!

I heart my job and inflicting psychological damage on you all!

But, seriously, there were some fantastic questions from the Belmont students, and it was such a great environment that my other “relationship guru” friends like Sharideth (yes, that’s her name), Guy (yes, that’s his name), and Michael Johnson (no, not the Olympic sprinter) felt the freedom to pipe in whenever they felt my answers were lame.

One guy (no, not that Guy) asked the question, “So, how do you break up with someone?” 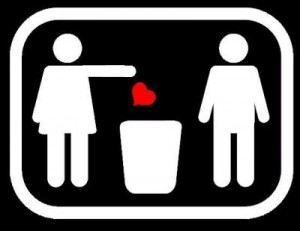 Apparently my suggestion to send an “It’s me, not you” note via carrier pigeon after the person is electronically notified via Facebook that he or she is now NOT in a relationship with you, as well as a possible move to a different state, wasn’t an adequate answer. Michael decided to offer his stellar advice…

“Throw God under the bus,” he said. You know, the age-old “God told me we shouldn’t date anymore.”

(Brief moment of silence while students assessed his level of seriousness.)

So that led us into less of an actual answer but to a very important point that I would like to make, which is:

how NOT to break up with someone.

Nine times out of ten, if you say God told you to break up with this person, I don’t doubt you actually believe it. But I also think that a little deeper down it might be because you think he or she is ugly.

I’ll give you the benefit of the doubt; maybe you saw some serious red flags. Or maybe you just know he or she is not someone you want to have kids with someday. Or maybe the person smells, I don’t know. But if you have a personal relationship with God, then I don’t discount that He can lead you to the conclusion that you should break up with a particular boyfriend or girlfriend; however, that doesn’t mean you should necessarily TELL him or her that God led you to that conclusion.

I would call this untactful and possibly damaging.

Put yourself in his or her shoes. Someone says, “I think you are ug… I mean, I was praying last night and really sense the Lord telling me that we are not right for each other.”

Now what is your perception of God if you didn’t hear the same thing from Him?

“Am I not good enough for him?”

“Is this person playing the God card?”

Before we get into how to break up with someone, I just want you God-card-playing folks out there to think a little more before pulling that one out of your deck.

Thanks, Michael, for helping me expand on what NOT to do. Moving is always a way smarter option.

What would you add to the list of how NOT to break up with someone?