I prefer posing questions to give possible scenarios pointing the asker to a more global answer. I want to push myself and all of us, to think.  And that’s what I want to do for those of you who simply see The Hunger Games as one of two extremes. 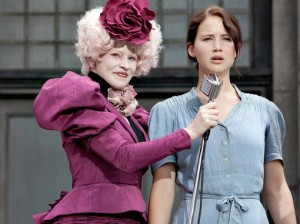 Purely Entertainment or Too Violent

In case you have been living in a Wi-Fi-free van down by the river, the first book of The Hunger Games series came out in the movies on Friday. A larger group of us went and, like all movies with startling moments, I responded in like fashion with my loud man-grunt. Multiple times. It’s not pretty folks.

So yes, the movie is violent.

The disturbing aspect is that teenagers are killing one another in a battle for survival…on reality television.

If you are of the extreme that chalks The Hunger Games up as purely entertainment, then I would challenge you to take a step back and ask yourself if you are as numb to the larger questions of life and morality as those “blessed” to live in Panem? Is the only difference that you don’t wear neon clothing and too much hair gel?

And if you are of the “it’s too violent” crowd, I would also ask for a tiny step back. First, if you are a parent, then you have a responsibility to know your children well enough to know what is appropriate for them. I’m not trying to argue that your child must see this film. I’m only saying that I think the violence teaches a very valuable lesson that makes this something far more than just an act of teenage homicide.

The kids in the film know it’s wrong. At least the ones who are thinking.

When I was a child, my family watched World War II movies. I now have an odd intrigue with World War II.  I recently bought a pair of boots because the salesman said the canvas was from the WWII British Army.

SAAA—WEEET! History on my feet.

Everyone should learn about WWII. In the timeline of history, it essentially happened yesterday and for numerous reasons I shouldn’t have to explain, it should never be forgotten.

“The Hiding Place” and “The Great Escape” were among the movies my family rented; stories of evil and despair mixed with hope, courage and strength. I remember being about ten years old and my parents renting “Schindler’s List.” I was not allowed to watch R rated movies but I remember them talking to me and essentially saying,

“Joy, this movie is really heavy. It’s rated R because of the terrible images, but it’s also history. So you are allowed to watch, but it’s up to you.”

Wow. I never forgot that moment.

I felt like I was being treated like an adult. I had the freedom to choose; an explanation of why and the result was a feeling of incredible responsibility. It was a very rare and introspective moment I had as a child.

The movie began and I can’t remember why, but I chose to leave and not watch. Thinking and choosing wisely for myself would not have begun developing at that moment if my parents had said, “ok, we’re starting the movie” or “Joy, go to your room, you shouldn’t watch.”

But, this post is less about parenting and more about us being a generation that fosters thinking in each other. Whether it is our peers, parents or children.

I tweeted after I saw the film on Friday night that I believe The Hunger Games is an incredible social commentary for our generation. Some have asked, “why?”

Why Hunger Games Is A Social Commentary For My Generation

Hunger Games depicts passive and disgusting voyeurism. Teenagers killing one another while their parents watch and strangers cheer. No one has bucked the system because:

2. There’s nothing little ol’ anyone can do.

As we are shocked by the premise of The Hunger Games, are there things on TV today that people 200 years ago would have been surprised we call “reality?” Do we have a moral compass that has bent to what we are told is normal? Do we shrug responsibility in light of saying there’s nothing we can do?

Katniss (the star of the series) doesn’t want to get married or bring kids into the world because of all the pain she sees, yet simultaneously she has feelings for two different men.

Do we see resistance towards the institution of marriage because we are simply apathetic or because there is a deep fear around a real desire? And are we paralyzed by the paradox of choice while simultaneously assuming it’s our right to always have a better option?

Have we not already seen the impact of our generation to influence a political campaign when we are spoken to in our language? There is great empowerment and danger in this if we don’t become a generation that thinks about how “reality” is marketed to us.

We’ve seen and been warned that material things will not buy happiness, and yet isn’t that the “prize” many of us strive for today? Haymitch didn’t have a choice in being entered in the game, but we know through the story of Katniss that how we play the game will always be up to us.  Will passiveness stop the oppression and darkness in this world? If those who have an option to live differently don’t, over time will that influence the belief that there is no other way, and contribute to compliance with the “games?” And without hope and purpose, will many think we are free while bound to consumerism and addiction? Like Haymitch, many of us are unaware of the person we could be, buried under the layers of our calloused state of pain.

The Hunger Games bucks the social constructs, not for the sake of simply being “down with the man” but because a few teenagers start thinking about what is right and wrong and will not fear even death to encourage a culture to take a stand.

I’m excited about our generation and how this movie can point to truths of today and possibilities of tomorrow. May we be a generation that thinks and stands for what is right and wrong not only for us, but for our children. May we lessen our consumerism, voyeurism and apathy to get in tune with our deep pain, our fear and cling to Truths that defy all odds.

p.s. Two odd facts about me:

2. I read 2.5 of the books in The Hunger Games series. I don’t want the books to spoil the ending of the movies. #truefact #iknowitsweird