Illumination Guest: Mike Pacchione – When the Clock Runs Out

Mike and I both live in Portland and “run in the same crowd”—whatever that means.

Recently, a few of us were eating at my favorite food cart and we noticed a small, mystery novel bookstore across the street called Murder by Books. We wondered how places like that stayed in business and had fun making up personality profiles for their clientele.

Last week, I was back at the food cart (since I practically own stock in the place) and noticed the bookstore had closed. I sent Mike a photo and he texted back,

This accurately depicts my friend, Michael Giancarlo Pacchione. Enjoy a further glimpse into his mind. 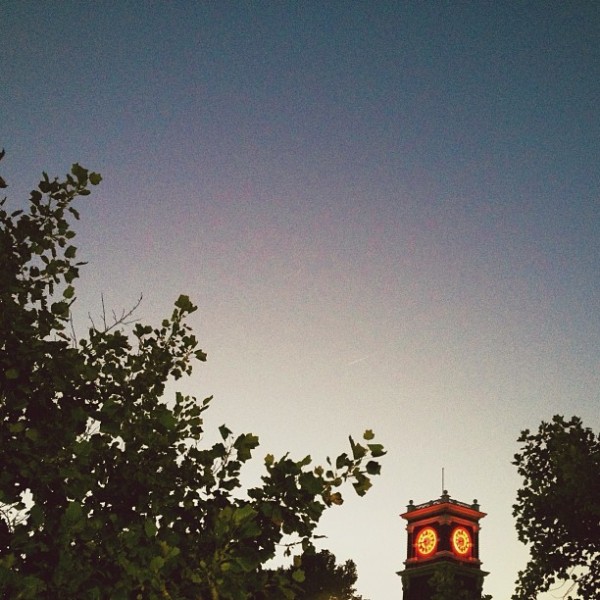 When the Clock Runs Out

One of my first memories is me telling my mom I could live forever. All I had to do, I told her, was not get shot by a robber or die in a fire. I can’t imagine how troubling it must have been for her to tell me the truth. Since I wasn’t raised in a Christian home, the truth didn’t involve a lesson about Heaven or Jesus. Life ended when the clock ran out.

From that point on, I heard a steady tick tock in my head, the sound of me moving closer to death.  Late at night: tick tock. Accidentally swallowing shampoo: tick tock. And especially on airplanes: tick tock.

I lived that way for 23 years—through high school, through college, though traveling abroad. I met people from all over the world, from different nationalities and different belief systems. At times all of these belief systems made sense.

But there was something that stood out about Jesus.

One night at my parents’ house, a year out of college, I decided to find out what that something was.

I thought of athletes who had thanked Jesus after a big win. I thought of a free Life of Jesus comic book I’d stumbled upon as a little kid, and I thought of the story it told. I thought about how everything about Christ pointed to perfection and love.

I started to believe in Him. Late at night, sitting at my childhood home outside of Philadelphia, Jesus made logical sense.

But there was one problem: I didn’t know what to do next. Was I a Christian now? Did I have to say a specific prayer? I decided I would figure all of that out in the morning.

Then morning came. I’d made a rational argument for Jesus the night before, but this day started the same as any other: I woke up and slumped across the hall to turn on the TV.

There was one major difference, though: when I turned on the TV this time, I saw planes crashing into the World Trade Center – the same World Trade Center, where I had friends working, two hours north of where I lived. Two hours south, a plane hit The Pentagon. In my mind, Philadelphia had a big target on it right in the middle. The world was ending.

I’d spent much of my life hearing that tick-tock, wondering when my world was going to end. Is it going to happen now? What about now? Suddenly now was now.

I kept waiting for some slow-motion movie type moment when all the world made sense and I heard Christ declare me fit to be saved. If anything I felt the opposite: I wasn’t fit to be saved.

Then the lightbulb moment: I realized I was fit to die.

I’d always heard these stories about how, when you become a Christian, you can feel all the sin draining away as the Holy Spirit envelopes you in love. I felt none of that. I just heard a clock ticking.

I set the timer on my TV and tuned in to the Worship Channel. Even before I was a Christian, nothing soothed me more than falling asleep the late night public access of water rolling over rocks or similar tranquility. On this night, they had replaced scenes of nature with the American flag.

I’m about the least patriotic person in the world, but for whatever reason that’s what did it for me. I fell asleep that night with a small part of me scared I would never wake up. Thankfully there was also a larger part of me knowing if this were my last night on earth, I was probably saved.

The clock stopped. In a good way.

Was there a moment in your life that changed the way you viewed Christianity? A moment that made the clock stop ticking?

Contrary to popular belief, you can have a dramatic Italian name like Michael Giancarlo Pacchione and not be in the mafia. True story.

A devout comic book reader growing up, Mike now helps speakers incorporate story into their presentations. Yes, that’s a real job. If you ask nicely he will also help you get rid of your ums.

Mike is a certified marriage official and once used Star Wars in the wedding homily.  He and Joy became friends despite an initial encounter wherein she told him she prefers corner brownie pieces to centered ones. Why would you want a hard outer rim when the whole thing can be nice and chewy? What a weirdo.