How (Not) to Propose Like God by Joshua Ryan Butler

Why is there so much violence in the Old Testament? How could a loving God allow _______?  Isn’t it arrogant to believe Jesus is the only way to God?

How do the above questions pertain to a website about relationships, Joy?

These are all valid questions, but if you’ve spent much time on the Love and Respect Now site you know that I write from a place that not only desires for people to understand and have hope for marriage, healthy dating and significant singleness, but for people to know God.

My friend, Josh, recently came out with a book that addresses some of the toughest questions I have asked about the God of the Bible. He has also written a specific post tying in some of the big themes of his book with an analogy of proposal. I love the imagery he uses and it makes me excited to finish his new book, Skeletons in God’s Closet. 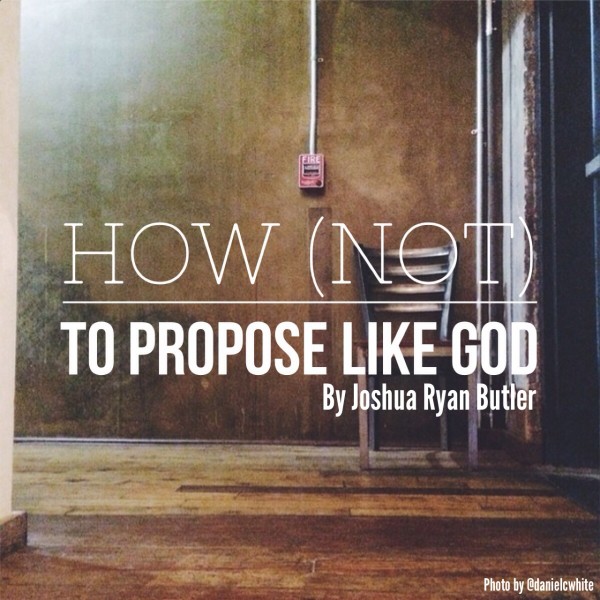 Getting ready to pop the question? Want to do it in a “godly” way? Well, maybe we can learn something from the way God proposes.

The cross is God’s marriage proposal to the world: where the Groom bends down on one knee and invites us to become the Bride, to turn from our independence and autonomy, and enter into intimate communion with the very life of God.

What I find interesting, however, are the ways God doesn’t propose. I would suggest if you want to find the best way to ask the love of your life to be with you forever, we can start by observing four ways God’s doesn’t pop the question (though many people seem to think he does) . . . to learn what not to do.

Four Ways Not To Propose

Please, for the love of God (literally), don’t propose like this:

1. “Marry Me and Bring In Your Old Lovers”

God doesn’t bend down on one knee, bust out the ring, and say, “Marry me and bring in your old lovers.” God wants the fullness of who we are with all of who he is, and our old lovers—the gnarly stuff like sin, idolatry and injustice we once gave ourselves to—are like abusive ex-boyfriends with an agenda.

They want to crash the wedding and tear God’s honeymoon suite apart.

Some people think if God truly loved us, he’d just look the other way. But letting our old lovers in wouldn’t be nice—our rebellion is the destructive force that tore our world apart. Our world is redeemed from sin and to God. For God to heal creation but ignore unabashed evil would mean creation hasn’t really been redeemed.

It would be like a doctor saying he’s healed his patient of cancer and ignoring all the incoming tests and X-rays showing the cancer still there. If children are still crying, nations are still warring, and people are still dying—then it isn’t really the new creation.

God loves us too much to do that; he won’t settle for a sham marriage. God’s wedding consummates the union of heaven and earth and God with his people forever. To bring sin into the wedding is to bring our old lovers into God’s honeymoon suite. And God won’t have it.

Which brings us to the next bad marriage proposal.

This is a really bad way to propose. And unfortunately, this is the way many popular caricatures depict the big, bad, scary topic of hell (one of the topics I tackle in my book). Fortunately, this is not the way the bible depicts things.

God is not a sadistic torturer.

I grew up on Bill & Ted’s excellent adventures and bogus journeys where, like most popular Hollywood images, hell is an underground torture chamber: deep in the belly of the earth, where little red devils with pointy tails and pitchforks poke at you for eternity.

But these images are pretty silly. In Scripture, hell’s location is not underground, its purpose is not torture, and its construction is not a chamber (here’s a quick video where I talk about this more).

If someone proposed saying, “Marry me or I’ll torture you,” we would rightly be horrified . . . and lock them up. This is not how God proposes, and not how we should either.

If we reject God’s wedding proposal, some have found annihilation to be God’s most merciful option for dealing with our stubborn rebellion. But I think there are a few significant problems with it.

First, it’s like God saying, “Marry me or I’ll kill you.” This is a REALLY bad way to propose!! Don’t do it. If you’re considering it, call Joy! She’ll help you think through a better way . . . or she’ll call the police.

It’s also problematic because Christ has conquered death. The grave is no longer an option. Jesus has torn down the gates to the graveyards, raided our coffins, and closed forever the dark road leading down into the depths of the earth. So this minimizes the life-giving power of Jesus’ victory over death.

Some people find God killing the marriage-rejecters more merciful because they’re responding to the caricature of torture. “Why can’t God simply put them out of their misery?” But as already mentioned, this is not the way the gospel works: God is not a sadistic torturer.

If you knew a guy who asked the love of his life to marry him and she rejected the proposal, you’d hope he had the maturity to simply move on and let her go her own way. If he killed her for turning him down, we would think him small, vindictive, and cruel.

And we’d lock him up as a criminal.

Finally, some have found God’s most merciful option to be a universalism in which he sends unrequited lovers downstairs to purge them of their sin until all are eventually redeemed into his kingdom. Once again, however, there is a major common-sense problem with this. It is like God saying, “Marry me or I’ll lock you in the basement until you learn to love me.”

We know from common courtesy and everyday experience that the most mature response to a rejected marriage proposal is not to abduct the unrequited lover and lock them in your basement, but simply to let them go their own way.

Abduction of any kind is a bad marriage proposal.

Once again, folks are usually responding here to the caricature of torture. If annihilation tries to get rid of torture by simply killing the unrequited lover, universalism tries to find a constructive use for it: such as dealing with our sin. Both are problematic because they are responding to a caricature to begin with.

Jesus delights to embrace us, grace and goodness beckon from God’s city, but our independence, autonomy and pride must be left at the door. To ask Jesus to redeem us from sin is to ask for what he has already graciously provided on the cross.

Our problem is not God’s refusal to marry us, but our refusal to be bound in union with him. Asking God to redeem our refusal of redemption is to ask for a contradiction: it is like asking God to let us accept the marriage proposal and never have to see him again.

God is good. Gloriously good. Better-than-we-can-ask-or-imagine good. And he shows us a good way to pop the question. With sacrificial love, we vulnerably open ourselves up to the possibility of rejection, of being wounded, as we propose, “Marry me . . . or go your own way.”

God invites us into marital union with him, but he creates a space for those who prefer independence to communion, who want autonomy over worship, who desire sin over salvation. This is, so far as I can tell, the most merciful option God has for a rejected marriage proposal.

And in the gospel, this is the option he takes.

Jesus invites us into union with God, adulterous rebels that we are. God’s arms are wide open, inviting us to turn from our sin and be healed in his care! The Great Physician loves to heal, the Lamb desires to forgive, the King freely offers amnesty to all who will receive it and be made citizens of his kingdom.

God doesn’t torture, kill or lock us in his basement. And he doesn’t settle for an open marriage. So please, for the love of God (literally), don’t pursue the love of your life in those ways either!!

Leave a thought, comment or question below for a chance to WIN one of FIVE copies of The Skeletons in God’s Closet: The Mercy of Hell, the Surprise of Judgment, the Hope of Holy War

Joshua Ryan Butler serves as pastor of local and global outreach at Imago Dei Community, a church in the heart of Portland, Oregon, where he enjoys helping people who wrestle with some of the tough topics of the Christian faith. Joshua oversees the church’s city ministries in areas like foster care, human trafficking and homelessness and develops international partnerships in areas like clean water, HIV-support and church planting. Joshua is also a worship leader who enjoys writing music for the life of the church. Joshua’s wife Holly, daughter Aiden and son Jake enjoy spending time with friends over great meals and being a foster family for vulnerable children.

View Josh’s website HERE. Find Josh on Facebook HERE, on Instagram HERE, and on Twitter HERE.  Don’t miss the trailer for his new book, The Skeletons in God’s Closet, HERE. (And, of course, you can purchase the book HERE.)

Let the Light Shine Out