Eric Metaxas has written another book, and I’m sure it will also land on the New York Times bestsellers list like my other favorite book, Bonhoeffer (which he also wrote). Moving in a slightly a different direction than a historical bio, Eric’s most recent project, Miracles, centers on a topic that is a bit of a mystery to most of us.

But before we dive into all of that, get ready for some laughter as I take him through some “would you rather” questions and talk comedy, coffee and his distaste for wasps.

Want to read Eric’s new book, Miracles? Leave a comment or question below for a chance to win one of two SIGNED copies!

You don’t really want to zoom ahead, but if you only have a 10-minute break at work:

3:26 – Grammatical errors that drive him batty

5:36 – Humor rashes from the German side

32:15 – Guiding daughters through the dating process

48:29 – Love and Respect and Bonhoeffer and cash cows

“With wit and wisdom, Eric Metaxas will blow your mind with stories of phenomena beyond anything we might classify as merely natural. And he will bless your heart with what can happen in your life personally as you read stories of people (very smart people I might add) who “extra-ordinarily” encountered God’s majestic purpose converging with their daily lives, stunning and humbling them forever. Are you next?”

– Emerson Eggerichs, author of Love and Respect,
on Miracles by Eric Metaxas

The secret is out! Eric has also written a slew of other books. Here’s our (non-exhaustive) list: 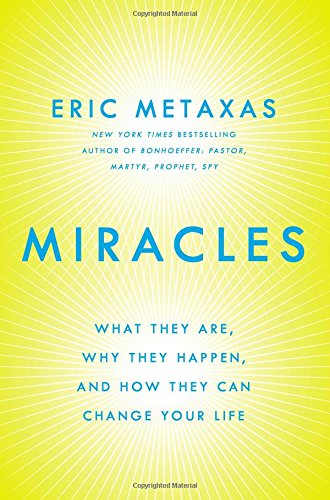 Eric Metaxas is a global speaker, thought leader, and #1 New York Times bestselling author known for mobilizing people to ask bigger questions and live more meaningful lives. His books have been translated into over 20 languages, and his memorable keynote speech at the 2012 National Prayer Breakfast has been viewed over half a million times. Metaxas is the author of several internationally acclaimed books including the New York Times #1 bestselling author of Bonhoeffer: Pastor, Martyr, Prophet, Spy, Amazing Grace: William Wilberforce and the Heroic Campaign to End Slavery, and Seven Men: And the Secret of Their Greatness. Additionally, he was a writer for VeggieTales and has written over thirty popular children’s books as well as published humor in the Yale Record, the Atlantic and the New York Times. He is the founder and host of Socrates in the City: Conversations on the Examined Life, a monthly event of entertaining and thought provoking discussions that feature Malcolm Gladwell, N.T. Wright, Dick Cavett, and Rabbi Sir Jonathan Sacks, among many others. ABC News has called Eric “a photogenic, witty ambassador for faith,” and he speaks to tens of thousands around the U.S. and internationally each year. He lives in Manhattan with his wife and daughter.