First: This picture kills me.  Partly because she looks like she just turned seven years old, and partly because my face is indicative of events that would follow 4.28 minutes later. This was taken the first week at a place in Switzerland called L’abri. Erin talked me into sledding down the side of an alp and 4.19 minutes later I thought it would be a good idea to sled…STANDING UP.

4.28 minutes later I had broken my ankle.

Little did I know my photo face would be so prophetic.

Second: This picture has nothing to do with the post Erin wrote for me.

Third: I asked Erin to write this post based off of an email she sent to a close group of friends. If you couldn’t tell, she is an amazing writer. I am not.  When I read her heartfelt words which often mimic my own heart’s struggle so poetically, I knew I wanted a version for my site.  Enjoy her words of wisdom and honesty. 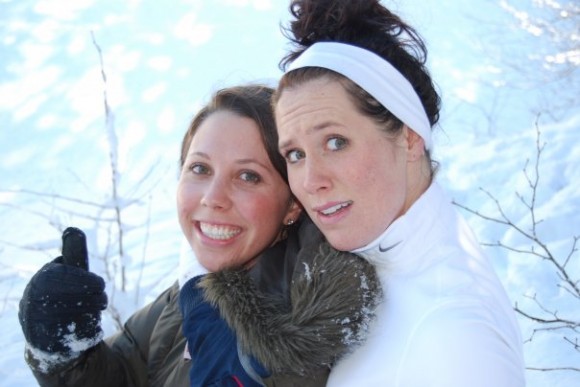 One recent morning  before I could open my eyes, I heard in the depths of my heart, “Trust me.” The words came unexpectedly, undeservedly,  like being handed a party favor far better than the present you brought for the birthday kid. “Trust me” rushed over the ache in my heart like a mountain stream, as soothing as a mother’s cold hand on a hot forehead.

Mornings usually begin slowly for me, these last couple of years, where I have been waking to a heaviness, pulling myself up by my bootstraps by sweet-talking into living this day, a day that’s been given to me although I know that at some point I will have to battle fear, anxiety, and loneliness. Some days, usually days where I anticipate spending them with people I love, are good days. I can picture the banana pancakes and cups of coffee that will stand on the table as we devour one another’s thoughts in real  conversations punctuated by laughter.

But most days I awake with a prayer, O God. Help.

I clearly remember the first morning I woke aware of the empty place beside me in bed, a space I longed for a husband to share. For the past six months I had felt certain who that husband would be. I had the “I just know” feeling  after all, and my prayers seemed to confirm it. He felt differently in the end, his answers from God very different than mine, and decided against marrying me and sharing my bed, and within the same year I lost four aunts: three to cancer, and one after a forty-five year battle with multiple sclerosis. My favorite aunts would not be there celebrate with me on my wedding day; there would no longer be a wedding. Those early morning moments, between closed and open eyes, is a vulnerable time. I began to wake up to accusing voices in my head, and this is what they said:

You are living your greatest fear; this is how it will be from now on.

You will always be alone.

You are getting old; soon you won’t be able to have children.

I told close friends and my parents, an older women  I trust and my counselor about these voices, and they wisely replaced the lies with hope. It helped. But along with truth, I was also listening to voices elsewhere,  was told by well-meaning people to “Just get married, don’t wait any longer to have kids”  (because it is just that easy), or finding myself in a writing slump (not a good thing for a writer), or mourning the fact that I am not living in my ideal setting, and I would find myself back in the world of those voices, which sounded so….truthful at times.

And then I turned 30, and although it was a special day filled with loving words,  poems, songs, and a dinner,  I found myself fighting to be honest about my yet unmet desires, especially when being told, as this woman said to me the other week, “When you’re 30, people start to worry,” and “You really want to have your kids younger than this.” I spit back my go-to line: “I’m waiting for a good one,” while inwardly I felt sadness at being misunderstood as “choosy” or “uncommitted” instead of patient. It hurts when people miss your heart. Choosing hope has been part of a spiritual battle, one I’ve been fighting for what feels like eons. Often, I’m ashamed to say, even though I pray I’m a little like Eore.

So, back to “Trust me.” With those two words, I realized that my worry and fear, dwelt on, had become sin. I had been sinning like crazy, and tearfully asked God for forgiveness. How often I doubt his goodness. It is so easy to see his goodness in the lives in other people, but do I trust his love for me, that he will be good to me?

I do. I must. It’s a choice I signed up for when I decided to follow Christ. After all, I married him first. I realize the truth of that promise after almost two and a half years of grieving the loss of what I thought to be good.  I have learned that  if the world’s a stage, God’s work is going on behind the curtain. Sometimes we hear hammerings or peals of laughter behind the velvet panels, or we catch a quick  glimpse of the shining work he’s doing, but we’re still waiting for that curtain to open. Regardless, God chooses to involve us. Despite our blindness to the whole picture, what we do, think, speak, act, and meditate on, matters. What I realized the morning of “Trust me”  is that I have been meditating on the wrong thing–I’ve been looking at my audience, so to speak, studying the features of my circumstances to determine whether my life means much or not. When I look at him I realize there is good work being done. And the curtain hasn’t even opened yet.

Oh, how he loves us.

If you like Erin as much as I do, you might want to check out the other times she has appeared on my site. There may even be a little music montage in one of the videos…